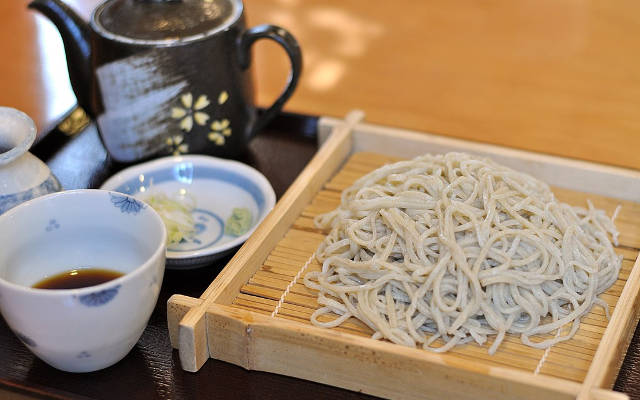 It's New Year's Eve.  What do you eat for the last meal of the year?

I know a lot of countries or societies have their own favorite food to eat at the end of each year for good reasons.  And in Japan, most people eat soba (buckwheat) noodle. 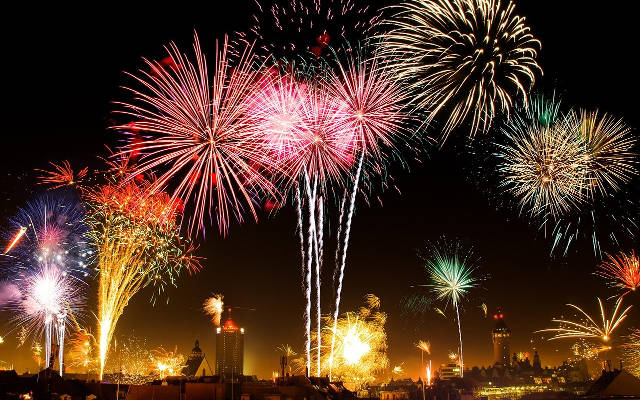 People have been eating soba since pre-historic time in Japan

Soba, or buckwheat, has been eaten in Japan for more than 1,000 years.  A book called Nihon-Shoki (日本書紀) written in 600s already reported that people ate buckwheat.  On the top of this, some archaeological evidences show people were already eating buckwheat in Jomon (縄文) period, which is thousands of years ago.

That said, soba back then was not the same with what we see today (like the picture above).  The noodle shape came around early 1600s.  That was when a more-than-century-long civil war period was over and a new era, which we call Edo era (1600 ~ 1867) now, was about to begin.

During this 250-year-long Edo era, people could enjoy 250-year-long peace without no big war.  This was when one of the origins of "Japanese food" was formed.

Before that, buckwheat was eaten in a kind of dumpling shape (soba-gaki: 蕎麦掻き), which is made by boiling buckwheat flour in hot water and shape it (below: image from flickr by Kazuki Miyata). 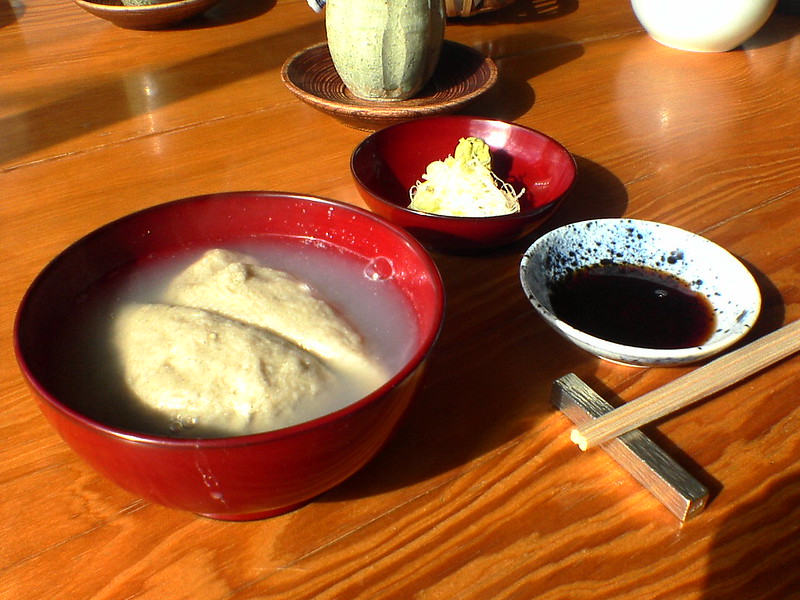 Soba was eaten not only for year-end, but also for every month-end 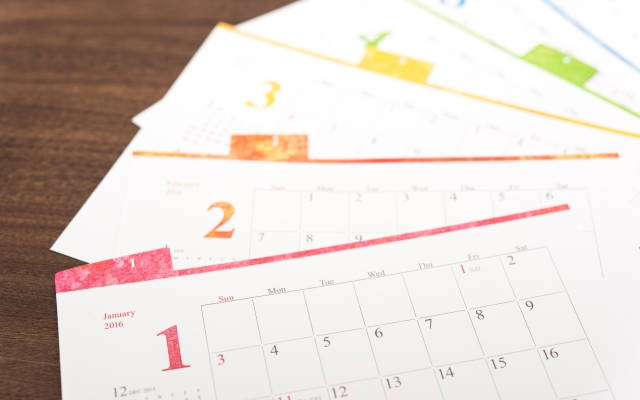 According to Wikipedia soba noodles are eaten by people since Edo period, the time of samurais (samurai period officially ended in 1867).

Shown below is a drawing by a famous artist Hokusai Katsushika (葛飾北斎).  The man looks so happy eating soba noodle, as the author (Hokusai) himself did. 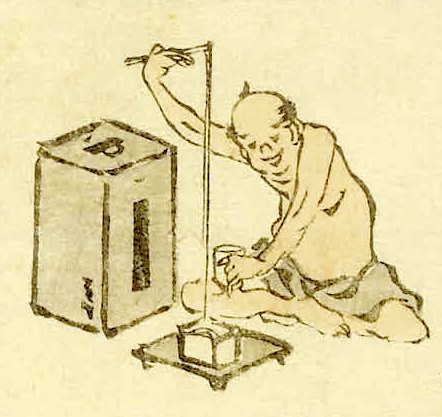 There are some reasons or believes around Eating soba noodle for year end, such as:

On the top of above, the following are also believed to be reasons of eating on New Year's Eve:

Frankly, I have no reason to eat soba noodle, but it is interesting to observe customs we don't think about in everyday life.

Well, not everyone eats soba noodle

But I want to tell you that not everyone can eat soba noodles for year end. In fact, my father did not eat.

My father was originally from western Japan and he didn’t like some food in Tokyo, such as cold plain soba and natto. Other family members, including my mother and her mother too, were all raised in Tokyo so my father was the outsider in some occasions, especially when it comes to food.

Soba noodle on New Year's Eve: in our case 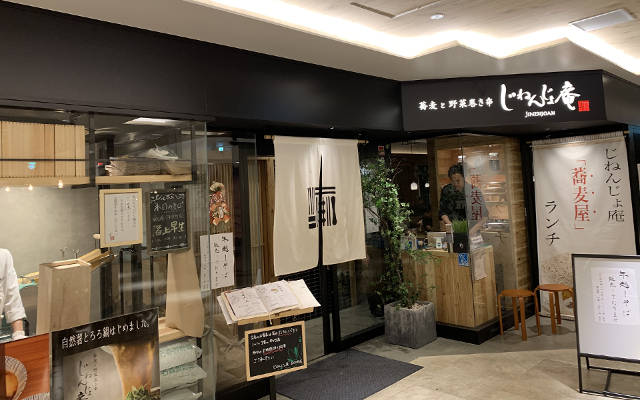 We went to a local soba noodle restaurant called Jinenjo-An, located in the basement of a train station. Although it was around 8 pm of New Year’s Eve, the restaurant was open till 10 or 11 and it was so packed. Yes, this is the big day for soba restaurants! 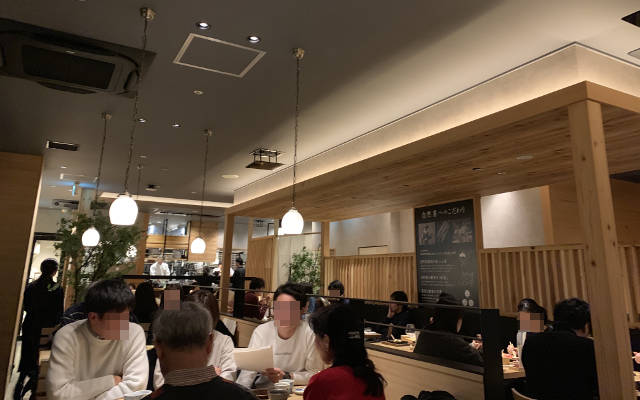 This place is a place where you can enjoy good homemade noodle for a reasonable price (8 - 10 USD). I like the decor and atmosphere of the restaurant: kinda stylish with jazz music as BGM and more like a modern izakaya rather than an old-school soba restaurant.

My wife ate their signature one jinenjo (自然薯) soba, which came with grated wild yam poteto called tororo. Tororo is a general term for grated yam paste, and jinenjo means “wild (= not harvested) yam potato” and is considered as a premium one. 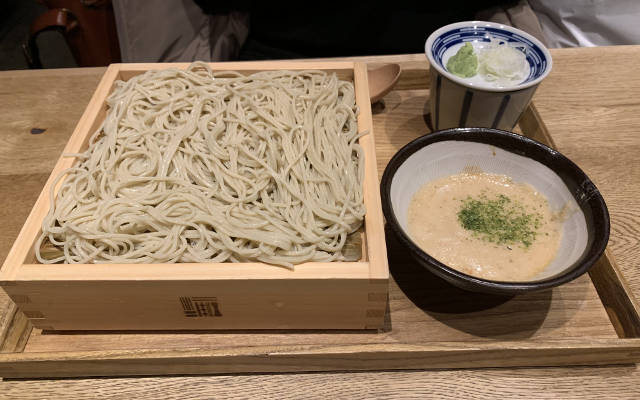 This food may look strange (or disgusting) to some readers but it’s pretty common in Japan to eat it with noodles, mixed with other slimy food such as okra or natto (yes, natto), or over steamed rice with a few drops of soy source. My wife love this slimy paste and don’t miss to order whenever she finds it in the menu.

I am not in the mood of yafm paste and ordered a Kakiage (かき揚げ: tempura of assorted small peices) as a side, and gobo (牛蒡: burdock root) chips.  The soba was so good but these fried items are not that good. 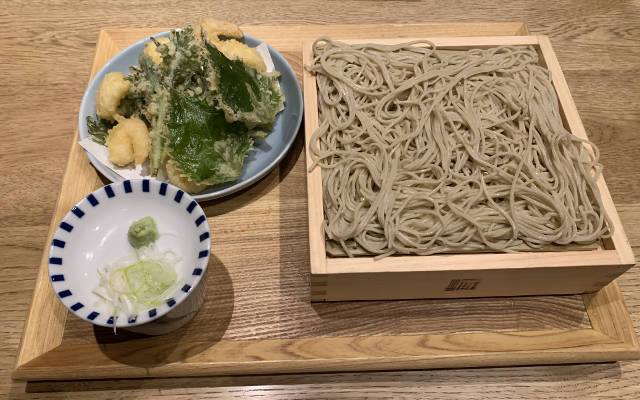 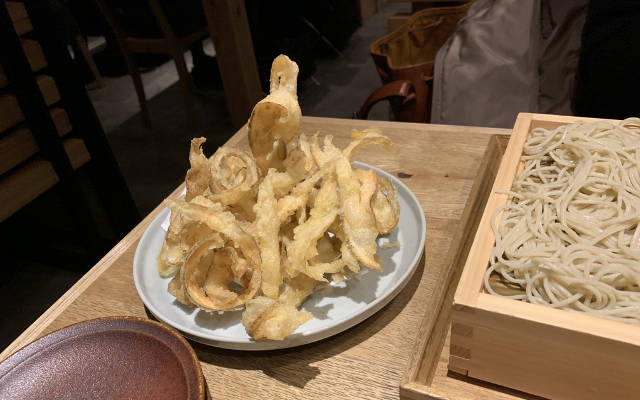 For kakiage, I was expecting small chunks like baby shrimps or scallops, and chopped veggies, all packed in a single big tempura crust. But it turned out fries of whole shiso leaves and veggies and shrimps, all separately deep-fried. 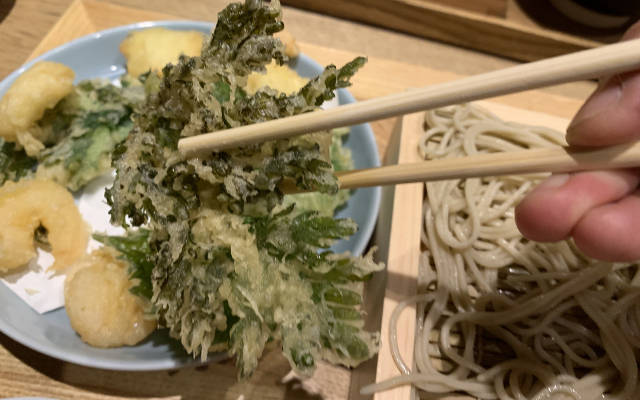 Well, the word kakiage means “gather and fry”. When you deep-fry ingredients separately one by one, then it is just a tempura, not kakiage any more. 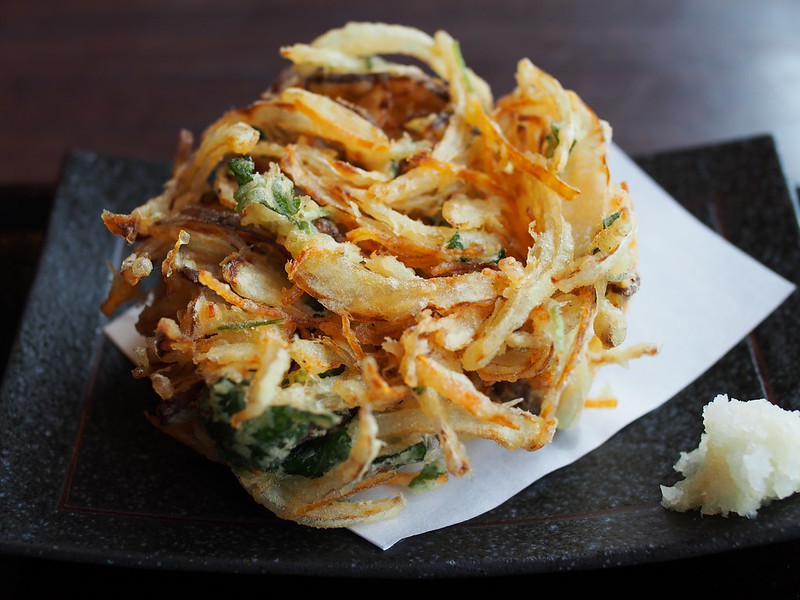 Next. Gobo chips.
I love this item as much as my wife loves tororo (grated yam poteto), and rarely fail to order whenever I find.  And this one was ... a bit too oily because it was battered and fried.

Usually, gobo chips are fried with no batter so you can enjoy its sweetness as well as the crunchy texture (image by doala from Flickr). 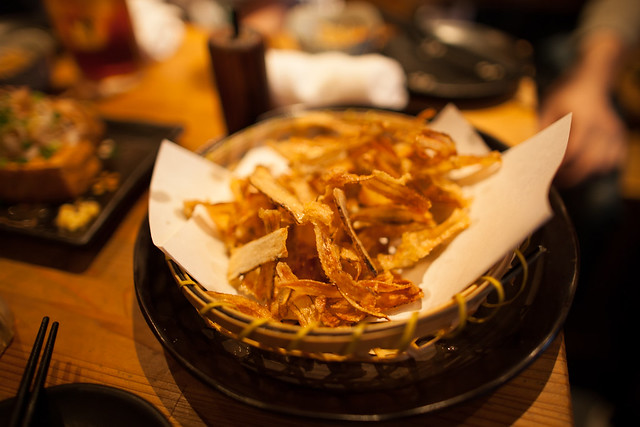 But if fried with batter, the batter portion is far more than gobo itself, and you end up in eating oily tempura crunch. This is not what I wanted.

That said, I was overall happy eating good soba noodle!

Although There are some ways to eat here and soba, I mean eating it cold or in a hot broth, you might notice we had it cold. If you had been in the same place with us, you would have found most people were enjoying cold soba in the middle of winter.

Well it’s basically a matter of personal preferences but I will stick to eating cold soba all year round, even in the middle of cold winter. And a lot of people around me do the same as well.

Why? You may ask.  Well, I believe it's Tokyo style as people in Tokyo (my family and friends) tend to do so and, what's more important, you can really enjoy the aroma, texture and taste of soba more when you eat it cold.

No hot soba (for me) please. 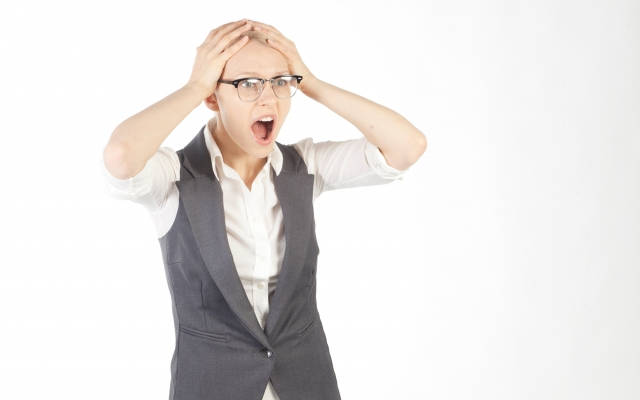 After eating soba, we headed back home and watched a year end music program, in which selected musicians are grouped into two teams (red and white) by gender I guess, and compete with each other.

Although it is a kind of traditional and very popular nationwide to watch this show for most Japanese people, I have never watched it, other than a couple of occasions when my wife told me that there was something that may interest me (it happened a couple of time in the past).

The reason I have never watched this is that my parents used to hate pop music and banned to watch this when I was little. I remember listening to a lot of classical music and no pop music, and practicing the violin, which I still play, in my childhood.

Growing up, I fell in love with and sold my soul to heavy metal/hard rock, and got another good reason for not listening to pop music including this year end music show. 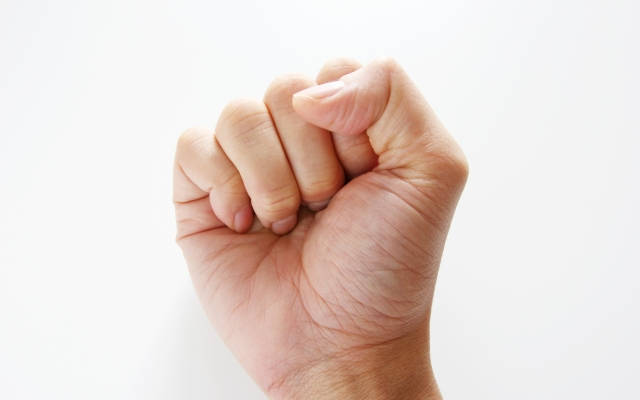 Ok, let’s get back to the topic. This time, my wife told me that there was something interesting to me on the screen, when I was listening to one of my all-time favorite metal tunes “Thundersteel” by Riot (now "Riot V").

When I turned to her,  I found.. KISS playing live on a Japanese show! And I also found that Yoshiki from X-Japan was on drums! 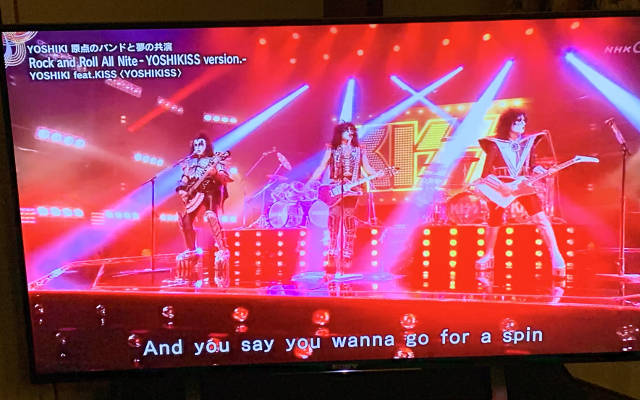 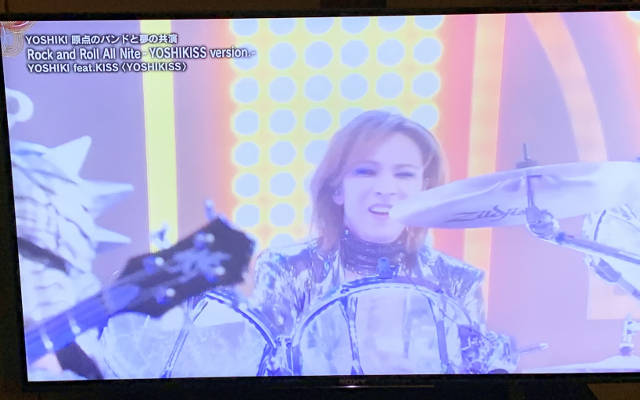 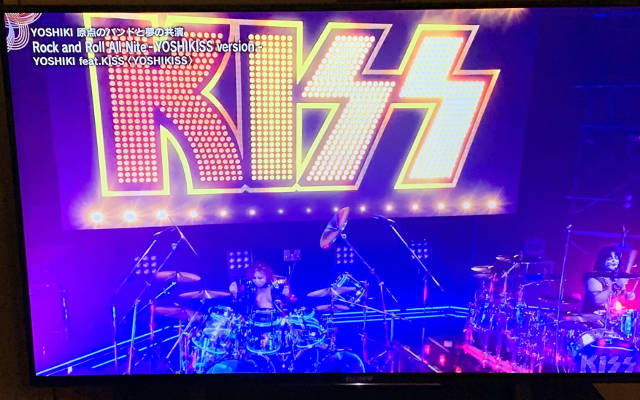 Honestly, I am in no way a fan of either of them (although I like some of X-Japan tunes), but found it great to watch this combination of big name musicians as the final ever of the year.

I wish you a happy new year!

More from my site

PREV
Welcome to Hungry-Oyaji.com!
NEXT
My first Jiro experience: Not the famous sushi place but where you can eat to death! 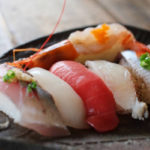 My first Jiro experience: Not the famous sushi place but where you can eat to death! 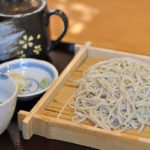 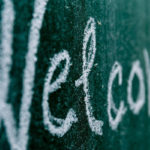